But he didn’t just fall off his bike. He fell into a ravine on the side of the road in rural Catalonia where he lay, severely concussed, for over 5 hours before he was found by a police helicopter. It might not sound like it so far, but this is a story of how technology can work, and on the types of privacy we can afford to sacrifice for the benefits we gain in using it.

At 10:30 De Jongh – a Directeur Sportif or manager, of the Trek Segafredo professional cycling team – left the house for a routine ride. Not an uncommon occurrence for someone involved in professional cycling living in one of the cycling capitals of the world. What was unusual, however, was that five hours later, he hadn’t come home.

We can’t know for certain, but it’s safe to assume that once a significant time had passed, his wife, Renee Meijer, would have called his friends, people he rides with, or anyone close to him who might have heard from him – the things you do when you worry someone has gone missing. We can also assume that one of the next calls she made would have been to the police. What we know, however, is that within five hours of his disappearance she turned to Twitter for help. 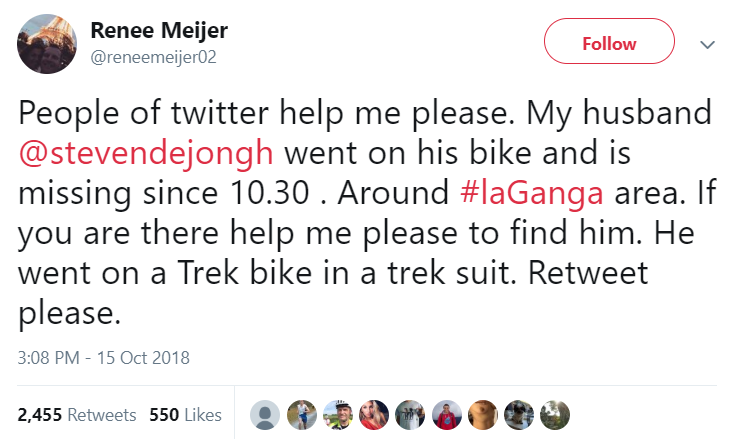 It’s hard to pick the most fascinating of the replies to this tweet, so here’s the thread. Within 38 minutes, the below map had been posted in reply, alongside a link to De Jongh’s Strava file of the ride featuring an abrupt stop rather than the normal loop back to where he’d started. Delving deeper into the Strava data you can see an abrupt deceleration and a fairly rapid decrease in his heart rate. 87 minutes later, the Google Street view screenshot – featuring the aforementioned ravine on the other side of the t-junction – was posted.

Less than two hours after Renee’s tweet, De Jongh had been found, conscious and breathing, by the police helicopter, and once the dust settled his wife, and a professional rider, Robert Gesink, took to Twitter to acknowledge the role played by the website and by Strava in locating him.

Technology often gets a bad press, but here we see two very useful by-products of two widely used – and often maligned – technologies. Twitter started out as a microblogging platform and Strava is largely used simply to record and analyse exercise, but here we can see how the technology and its uses have grown organically in the form of the crowdsourcing of information and in finding someone who’s in trouble; Strava has now formalised this in the form of its Beacon feature

This is heart-warming, if anecdotal, tale, but one which serves to remind us that technology is not necessarily good and not necessarily bad, but rather a prism which accentuates human behaviour. An infamous cycling doctor was once asked about the dangers of the performance enhancing drug Erythropoietin or EPO, replying, “EPO is not dangerous, it’s the abuse that is. It’s also dangerous to drink 10 litres of orange juice,” and so it goes with technology.

Abused – as with mass-surveillance, the swinging of elections, or simply spending too much time on social media – and technology can be bad for us, used well – as in this instance, it can be life-saving.

Reassuringly, despite a barrage of technophobic coverage, consumers recognise the positives. The above chart – produced using data from our exclusive Optimism Index – shows that while there are fluctuations across gender, age and social grade, the majority of consumers see new technology’s impact as positive, with negative views a small minority.

This is not to say that consumers should blindly sacrifice their privacy, but rather that when their privacy is properly managed – transparency when it can be afforded and opaqueness when it cannot –  it can reap enormous benefits.

Consumers’ positive attitudes toward new technology means that services like Strava’s Beacon are likely to be well received, and while it is important that consumers educate themselves on privacy, in cases like Steven De Jongh’s the sacrifice will be deemed worth it.