Regular readers of my blog will know that I spend quite a bit of time in Barcelona and I’ve noticed how the number of tourists visiting the Catalan capital has exploded in the last five years. Being a fan of the city and its vast array of attractions from beaches to architecture to cuisine – not to mention the sheer charm of the place – I can quite understand the appeal.

With the port being one of the key stops on Mediterranean cruises, boatloads of travellers pour into the town and the Ciutat Vella (the old Gothic centre) in particular. Often moving in long, snaking, lines – following a guide with a placard (or in Japanese style an umbrella) – the city is close to resembling the claustrophobic experience of Venice albeit with slightly larger streets.

Not surprisingly, the locals are starting to rebel despite the importance of tourism to the city’s economy. There have been street protests; in Gracia a small town swallowed up by the city when it expanded in the Modernista period at the end of the 19th century banners are placed on buildings saying (in English), ‘No to tourists’ or ‘Tourists not welcome’. The same has occurred in other districts.

It’s not just the numbers crowding the streets. The impact can be seen on restaurant and bar prices in tourist areas and in the reduction in the availability of reasonably priced local accommodation as rental rates are pushed up, whilst there have also been issues with the behaviour of a small number of tourists – naked Italian men being a recent example. (Far be it from us to suggest there is any link to the large number of stag and hen parties that choose to celebrate in the city!) 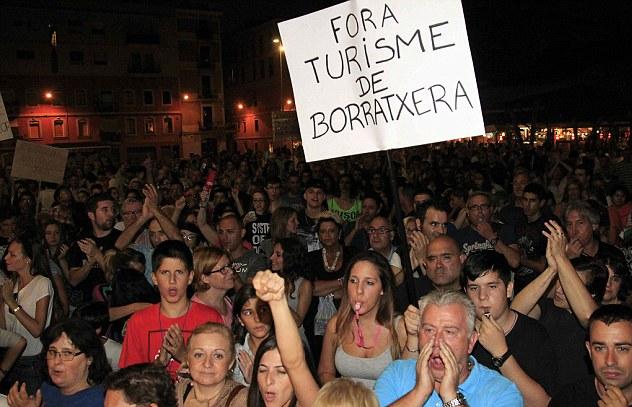 Protestors in Barcelona rebel against binge tourism in the Catalan Capital

Not only is this an issue for tourism around the world – and particularly with regards to short breaks where we forecast significant growth – but it also threatens the development of the sharing economy, the topic of a recent blog. Although in my experience Barcelona taxi drivers are some of the nicest and most helpful in the world, there is real antipathy towards Uber. A member of my family was asked by one Uber driver to sit in the front of the cab so that licenced drivers wouldn’t suspect him of being part of the ride sharing community (there had been physical attacks on other Uber drivers). A Spanish judge has since banned the UberPop service whilst there has also been widespread condemnation of AirBnB and similar ‘sharing’ rental outlets resulting in protests and a subsequent fine for the aforementioned start-up – €30,000 payable to the Catalan Government. The municipality has also threatened to ban the website if the company doesn’t remove hosts without an official tourist licence.

Tourism and the collaborative economy face big challenges ahead.