The abdication announcement by King Juan Carlos of Spain follows similar moves by Queen Beatrice of the Netherlands, King Albert of Belgium and Pope Benedict XVI in 2013.

While the latter two cited ill-health as the reason for their decision, both the Spanish King and the Dutch Queen claimed that it was time to hand over to the next generation. Similar arguments have been heard in both Sweden and Denmark with regard to their respective monarchs, leaving King Harald of Norway (77) and Queen Elizabeth (88) of the UK as the most secure monarchs of major nations in Europe (the other European monarchs are from Andorra, Lichtenstein and Luxembourg).

It’s an interesting frame from which to consider our ageing European society, taking place as it is at the very time that the balance of numbers, wealth, spending power and democratic clout is shifting to the older generations – with the first baby boomers now having reached retirement.

A key issue behind the statistics on longevity is that of healthy life expectancy, the relationship with income and occupation, and the implications of sustained and enhanced dependency in terms of health and social welfare provision. All the more ironic therefore that the most gilded members of (arguably) the luckiest generation in history are retiring on the grounds of ill-health.

Those of us with a republican philosophy are hoping this may presage the end of monarchy, indeed Hilary Mantel compares them to pandas ‘expensive to conserve and ill-adjusted to any modern environment’. The full piece is well worth a look here. 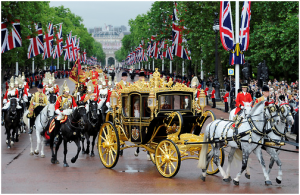 Outside of Europe and the Commonwealth there remain only 16 monarchs in place across the world with the most significant of these concentrated in the Middle East, particularly Saudi Arabia. The most revered monarch is perhaps in Thailand. The only major economy outside of Europe with a monarch (well, Emperor) is of course Japan.

The last monarch to be overthrown was in Nepal (2008) while the King of Bhutan liquidated the monarchy and held parliamentary elections (also 2008) . As the Independent article suggests many of the Bhutanese people were none-too-happy at the prospect of having to choose their leaders in the future – despite the belief that this would increase national happiness.

In our European age of austerity amid deep concern about public spending, visceral protests against board-room excess and business practices it seems an anachronism at best that we should continue to sustain these royal houses at vast public expense.

But how would we replace them and what is the public appetite for directly elected heads of state?

Of course, we recognise from our island of isolation that this appears to work perfectly well in other countries (although I discovered in writing this that François Hollande is not only the democratically elected President of France but also the joint king of Andorra and but for recent constitutional reform would have been the next in line to the throne of Monaco).

Can the next generation save the pandas? What can we read into the current popularity of the British Royal Family? Does it mean that the decline of deference is wilting in the face of radical uncertainty about the future? Does royal ascendancy inevitably reflect democratic disillusionment?

One thing is clear – the royals are not immune from the fevered tenor of the new morality – those that survive will be those that are the least visible. And if that is the case, then what then is the point of the monarchy?