We need a new way of looking at consumer confidence. Despite its widespread use as a – if not the – barometer of consumer sentiment in 2020 it is increasingly a blunt and unrepresentative tool.

We have measured consumer confidence – as part of our (much wider) values and attitudes monitor – since 2011. Since the start of 2018 it has been in negative territory – suggesting a recessionary mood without the recession. With month after month of basically the same figures, what are businesses and policymakers supposed to do with this news? 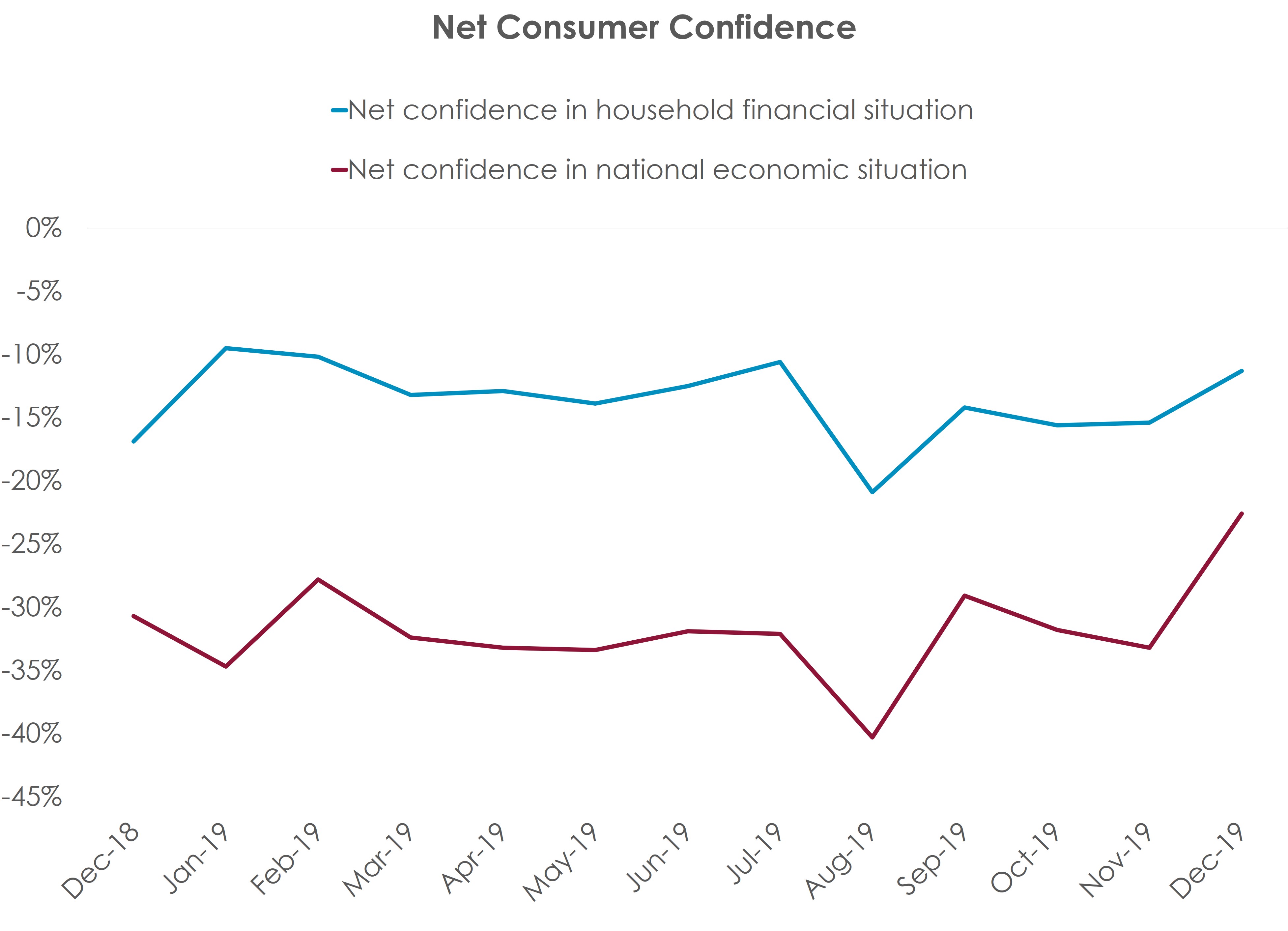 Typically, consumer confidence measures two things: whether that individual expects the national economy to do well or badly over the next 12 months and whether or not they expect their own household finances to improve or decline over the same period.

Reporting these trends at a headline level is, in theory, designed to give us a steer on how consumers are responding to the big economic news of the day. Are they worried about the impact of Brexit? What did they think about the latest budget? How much did they notice the recent GDP announcement? Is the underlying cost of living trend starting to bite? Will their minds drift to a foreign or domestic holiday this year?

There are two problems with this:

This year we will be taking a new approach to consumer confidence. Our data identifies not headline sentiment in economic or financial outlooks, but five distinct groups: 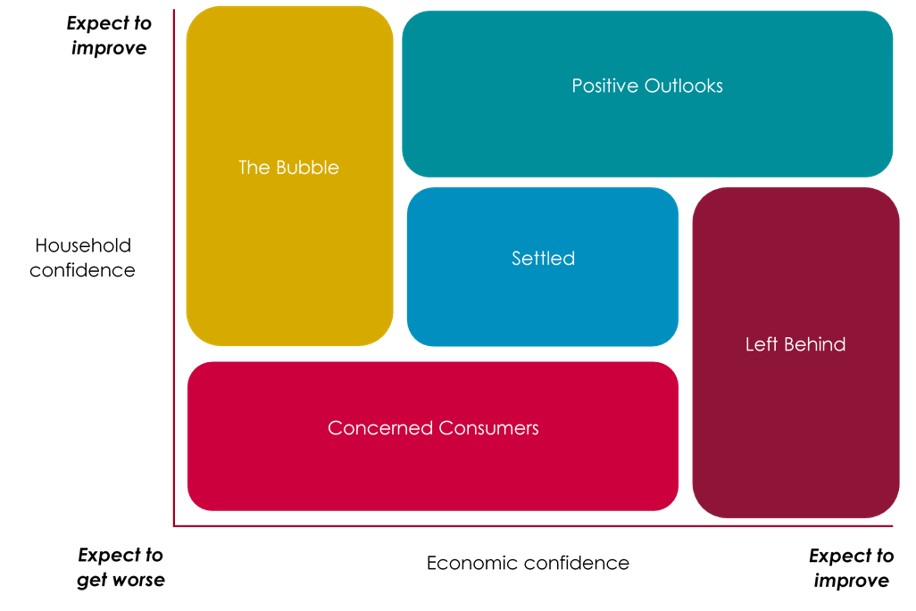 While at a headline level these indicators show negative sentiment the trajectory of these segments reveals some very different trends. At the outset of this year – with the Brexit question settled (for the time being) and much talk of economic growth – we might expect widespread positivity. 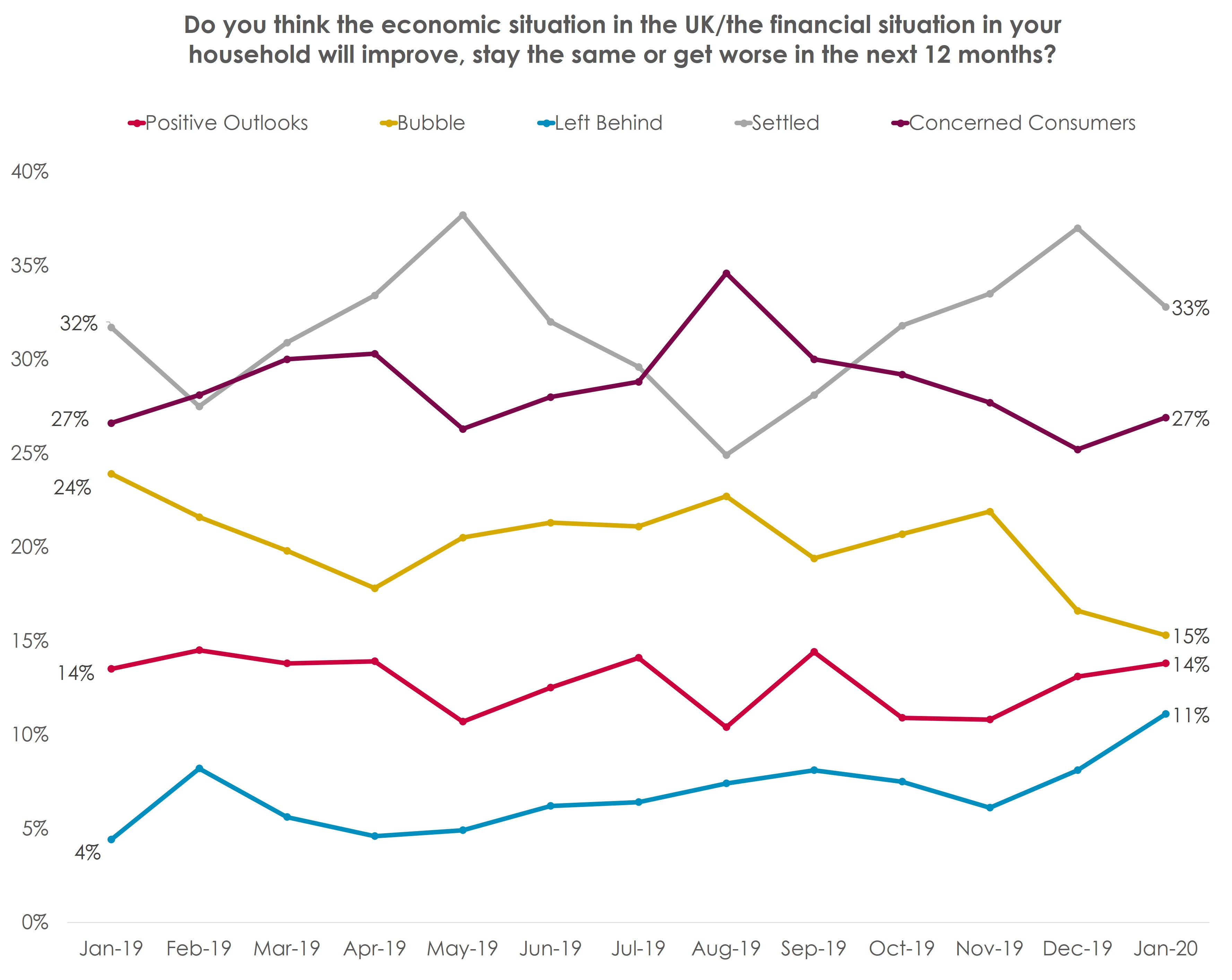 However, those with the most positive outlooks remain a small proportion of the overall consumer landscape while those ‘Settled’ – expecting no change – have declined since December. Where there has been growth it is in those sections of the population with a negative outlook: Concerned Consumers (who expect both the economy and their own finances to worsen) are up 2% and Left Behind (who expect the economy to grow at no benefit to themselves) are up 3%.

In a post-national trend era, it is essential to look beyond the headline indicators. Breaking down consumer confidence allows us to do just that and reveals five distinct groups with their own trajectories. The chart above will be updated in every addition of the Optimism Index – keep tabs on it here.