As calm eventually descended in Las Vegas after the massacre during a concert on Sunday night, news programmes scrambled for interviews with experts, politicians and survivors. These segments are a more or less annual event, and they follow a pattern.

On the Today programme this week Justin Webb interviewed two survivors of the Las Vegas shooting who, after describing the terrifying scenes rejected calls for further gun control. Their views were partly the result of a staunch defence of the second amendment and partly because they saw no potential legislation that could prevent attacks like this one. For one survivor, the massacre on the strip was the ‘tragic price of freedom’.

For our American readers, these views are likely to evoke strong reactions whether you agree with them or not, as the country has never been more divided on the issue. Data from the Pew Research Centre indicates that US registered voters are split pretty much down the middle on what the Government/President’s priorities should be. 46% say it’s more important to control gun ownership, 52% say it’s imperative to protect the rights of Americans to own guns. The 2% unaccounted for are apparently in the vanishingly small minority of voters on the fence about the issue.  Democrats and Republicans – once within touching distance of each other – are increasingly divided as the chasm between them yawns wider. 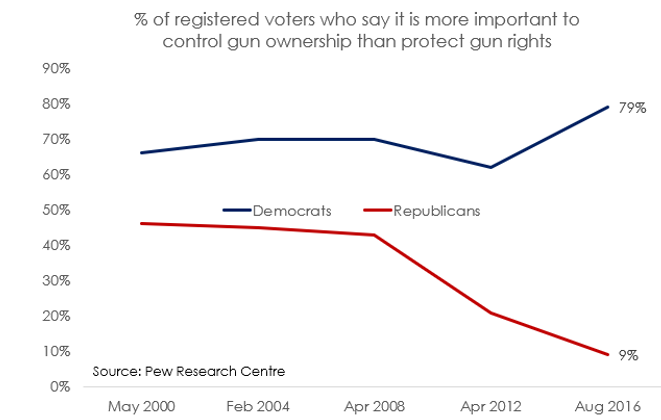 While events like the Las Vegas Strip shooting used to bring different groups together (following Columbine in 1999 two thirds of voters agreed on tighter controls) they now serve to polarise further. The most recent data – showing the widest gap between voters for either party – was collected weeks after the Orlando shooting in which 49 people died.

This division is symptomatic of a wider shift in US politics – one echoed in many other Western democracies – away from the centre ground.

In the US, Democrats and Republicans are increasingly unlikely to agree on a wide range of issues. The middle ground is evaporating in the UK too, while populist and alternative movements either spook or reshape politics across Europe.

In some respects, this is an inevitable response to years of consensus on market economics and globalisation. But social issues – the context in which gun legislation is often framed – are more emotive, and reinforce the widening division. In increasingly polarised democracies, this division is evident not only in political identification but also in demographic characteristics – as the wide age variations in the recent UK Election and EU referendum indicate.

This week’s events reinforce the trend of more fragmented, polarised individuals in western democracies. This will continue until a new consensus can be formed. Until then, there will be little progress – especially on gun control.