What a week it has been for FIFA. Not only have a number of the organisations’ executives been investigated by a cornucopia of national and supranational crime fighting organisations, the last seven days have also seen the re-election and subsequent resignation of Sepp Blatter, the man who has led the organisation for 17 years. Not the best time then for the US release of Blatter’s £16 million vanity project – the oxymoronically titled United Passions.

FIFA’s unravelling is the latest in a long line of institutional scandals (as touched upon in our blog on the New Morality 2.0) – phone hacking, PPI mis-selling, horsemeat, Libor rate fixing, and Operation Yewtree – scandals which contribute enormously to established trends such as the Decline of Deference and a lack of trust in organisations and executives (known elsewhere as C-Suite Scrutiny and the Focus on the Boardroom).

Whilst the resignation of Blatter and the intervention of the FBI could represent the start of progress for football’s governing body, it is possible that the extent of the corruption and the perceived difficulty of eradicating it will have long lasting effects on football’s collective psyche. What must FIFA do to regain the trust of fans, players and sponsors, and how resolute will this trust be moving forward? 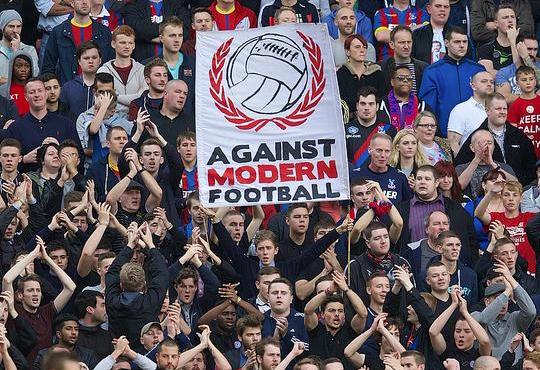 Indeed football in this country is not without its problems; slogans such as “Against Modern Football” and “Football wasn’t invented in 1992” are becoming increasingly prevalent as a reaction to the glitz and glamour of the Premier League which many feel has alienated them from their clubs.

There is good news however; the week which saw the fall of Blatter also saw the realisation of FC United of Manchester’s dream. The club, founded in reaction to the debt-loading takeover of Manchester United by the Glazer family in 2005, is supporter owned and democratically run, and this week played host to Portugal’s Benfica in a new £6.3 million stadium. The resurgence of community activism in relation to football is not restricted to Manchester; Dulwich Hamlet FC have seen a resurgence in recent years, not simply in terms of support but also in the progressive politics espoused by large sections of their support, culminating in a friendly against Stonewall FC in “arguably the biggest ever statement by a UK club in the crusade against homophobia”.

Though many are jaded by malfeasance at football’s highest levels, there are signs of hope, the passion is there, and the passion is united – just not necessarily by FIFA.