Autumn has arrived, bringing with it colder days, darker evenings and – less predictably – a change in the consumer mood.

Since March 2020, health concerns have been the dominant factor shaping our attitudes. The spread of Covid has made us think twice about being in busy or crowded spaces – especially indoor ones. It’s why, even outside of lockdowns, hospitality businesses have had to work hard to tempt people back through the doors, often reassuring them with extra safety measures or making better use of outdoor areas.

The good news is that Covid Caution – worry about being in these places – is declining. In October it reached its lowest level since we started measuring it (although 41% is still a lot of people). The bad news is that financial concerns are rising. Nearly half of consumers (45%) are now worried about the impact of the pandemic on their household finances. That figure didn’t change in October, but is 5% up on where it was in July. 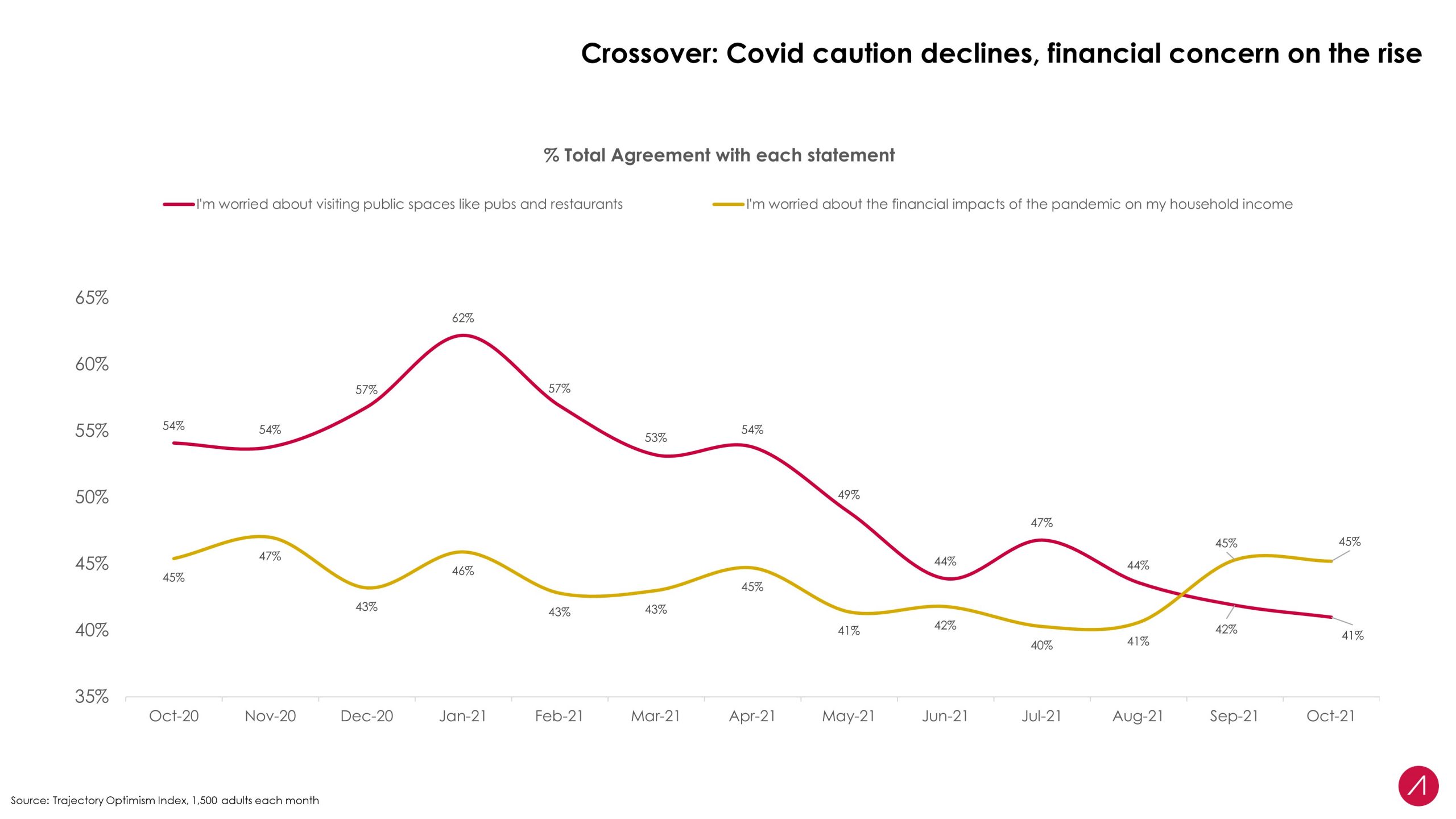 It shouldn’t come as a huge surprise that finances are weighing more heavily on people now.

The last few months have seen no shortage of bad financial news while also bringing plenty of other shortages. The government have announced tax rises and cuts to welfare payments at the same time that energy prices (and bills) are going up sharply. Rising pay is outstripped by rising prices. Furlough is ending as Covid-era support is scaled back. Consumer concern about the economy is pretty rational.

That concern doesn’t manifest in the same way everywhere. Job security, for example, is actually pretty positive, helped by a relatively healthy level of unemployment and record vacancies in some sectors. But recent months have brought much sharper changes in other indicators.

Changes in the economic weather have a wider impact.

When our financial resilience declines, our outlooks can harden too.

What does this all mean? Two things, mainly. The first is that, unless Covid rates spike uncontrollably, the health phase of the pandemic is over for millions of people. The second is that these financial trends will create a new, pervasive recessionary mindset amongst consumers.

Autumn is here, but, to coin a phrase, Winter is coming. Its challenges will be different to those of the last few months.

All these trends were explored in more depth in October 2021’s trends briefing. Subscribers can access the recording of that session, the slides and much much more. There’s more information available here – or email subscribe@trajectorypartnership.com to find out more.

All data in this article drawn from Trajectory’s Optimism Index, a monthly nationally representative survey of 1,500 UK Adults.