These are the words of the Airbnb CEO, Brian Chesky, last week, describing the impact of coronavirus on travel, and on Airbnb’s business, since March. The entire clip is remarkable, with Chesky speaking matter of factly about the future of travel – “the travel we knew is over, and it is never coming back” – and despite his pessimism, he identifies a powerful feature of the contemporary consumer psyche; a yearning for travel and for new experiences.

This is backed up by our data on pent-up demand during lockdown.

Going on holiday isn’t the same as popping to the shops, or deciding to go to a restaurant if you’ve made a mess of dinner. By and large it requires booking in advance, taking annual leave, and as our tastes have grown more exotic, and more expansive as air travel has become cheaper and cheaper, it’s involved leaving the country. Perhaps due to these complications, when consumers are asked what they will do first, going on holiday slips down the rankings slightly, falling behind ‘going shopping’ and ‘going to the pub’; consumers want to splurge, they want a pint, and then they want to go on holiday.

As much as consumers have become accustomed to a summer holiday abroad, the yearning described by Brian Chesky remains incredibly powerful; we might be picking from a reduced menu, but our appetite for holidays is undiminished.

Consumers want to get away, they want to have experiences that are set apart from their day to day existence, but they want to insulate themselves from the potential consequences of travelling during a pandemic. This is borne out by analysis of Google Trends data undertaken by the Financial Times, showing a first and second wave in search traffic for “UK staycation” compared to the historical average; one as lockdown started, and one as foreign summer holidays became an increasingly unlikely prospect. 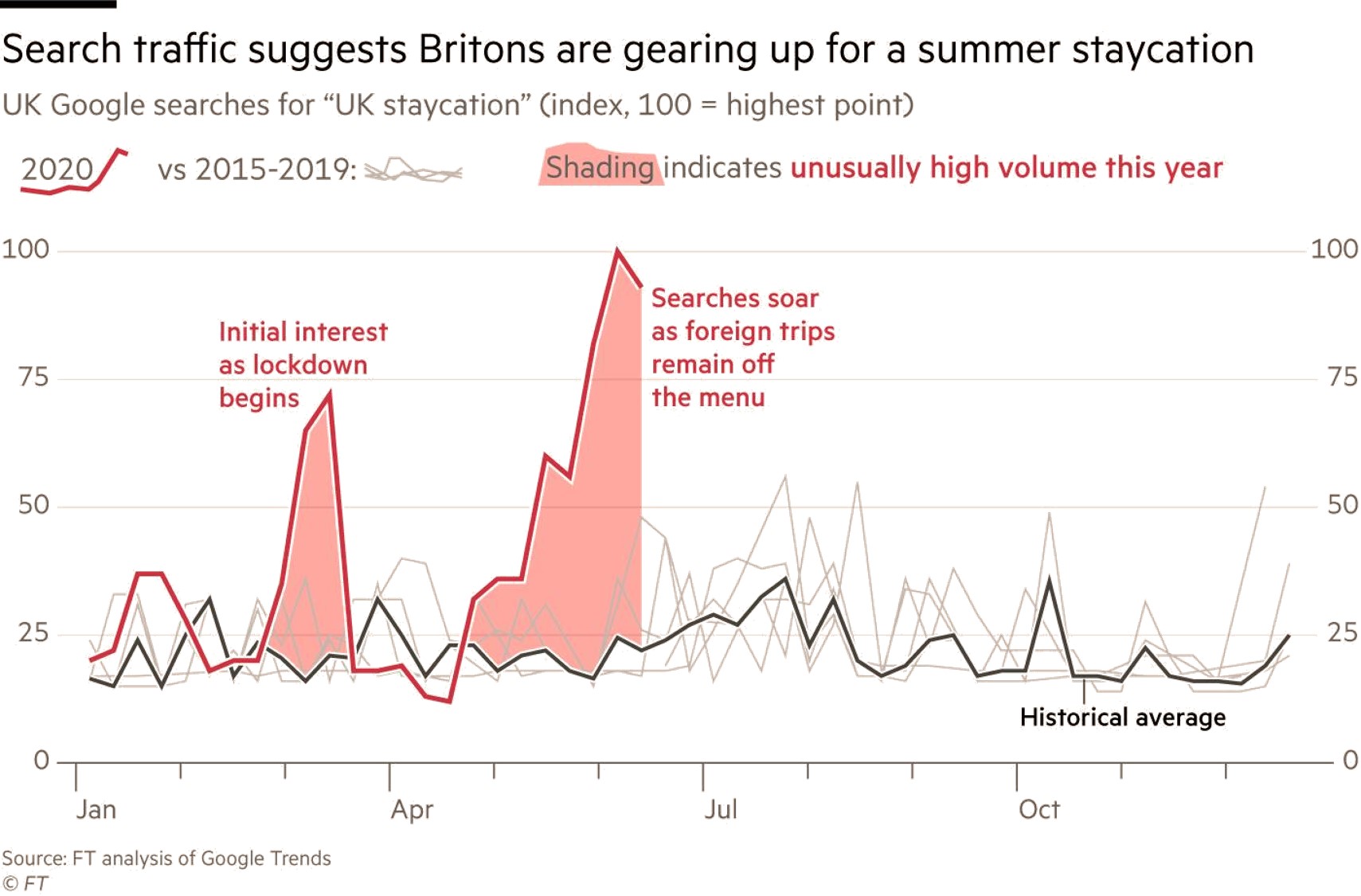 This might seem incredibly particular to the context of the pandemic; travel restrictions remain in place, many borders are closed, and travelling to another country involves the risk of becoming stuck should restrictions be required to halt further outbreaks. The biological nature of this crisis is particularly problematic for international travel, but as the long-term economic consequences become clear, consumers are increasingly likely to face difficulties of affordability with regard to foreign holidays, and a long-term staycation boom similar to the one observed in the wake of the 2008 financial crisis could be one lasting implication.

The good news for domestic tourism is that the UK is actually very nice; research undertaken by Trajectory in the midst of the post-recessionary staycation boom on behalf of Visit England showed that a significant proportion of consumers were glad that they holidayed in England rather than abroad, with 43% stating that taking a holiday in England made them want to take more holidays in England in future. This research was undertaken in 2015, 7 years after the beginning of the recession, illustrating the lasting nature of these shifts in consumer demand and consumer attitudes.

Travel as we know it might be over, but a yearning for new experiences remains. This yearning means that for UK consumers, the holiday and everything that comes with it, is more important than the destination itself. Despite it all, demand for holidays is as strong as ever, it is simply pent-up; when it is released, it could present a decade of opportunity for domestic tourism globally.