Alongside the military invasion of Ukraine, another war is taking place, online. Here, narratives are emerging to shape perceptions of the war one way or another. While the world’s media broadcast on Radio and TV from Lviv and Kyiv, taking shelter from the bombs and donning helmets when air raid sirens blare others are documenting the crisis online.

With Russian media largely removed from traditional channels outside Russia the Kremlin is left only with the wild west of online platforms to try and shape the narrative. This mainly involves polluting the online space further with the same lies and misinformation the Russian people are subjected to at home.

Propaganda is nothing new in war, and one of the risks to Putin is that his supporters or Russian people en-masse rise up to depose him.

But the tactics used in this information war have wider implications for all of us – and especially for online platforms like Twitter and Facebook and for authorities pondering future regulation or controls on online information. One such example is the use of AI-Generated images – such as the ones below – to write first person accounts (often from the point of view of Ukrainians) in support of the Russian invasion and against Zelensky, the EU or NATO. 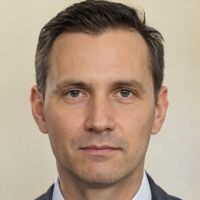 The picture was attached to a Facebook profile under the name Vladimir Bondarenko. But although he looks real, he is entirely fictional. Bondarenko’s ‘story’ on Facebook was that he was a successful aviation engineer until the Ukrainian aviation industry collapsed. He thinks Ukraine is a failed state and supports Putin’s mission. To be clear, this is not a fake profile using a real image scraped from somewhere else online.

The image itself is fake – as is everything else.

In this conflict, the reality is very different. The videos we see of Putin, Lavrov, Zelensky and Kaleba are all completely genuine (so far). Instead, it’s the information we see online – from people claiming to be just like us – that is the least easy to trust.

Recently we’ve been monitoring the state of trust closely – including in a recent webinar on the topic. The gloomy conclusion from that – from a UK perspective – was that the current fragile state of trust would persist in the short term and get even worse after that. In the short term, economic challenges will make us unsympathetic and cynical, while leaders will test our patience with scandals and run of the mill incompetence. In that sense, nothing new. These are events that continue a long-term trend for less trust in and less deference towards those in authority.

But the longer term challenges are much more fundamental.

They are about whether or not the information environment – comprising the media (on traditional and digital channels), online gossip and even networks of online friends – is one that is just slightly polluted by misinformation, or is a complete cesspool.

The faked pictures of people like Vladimir Bonkarenko are easy to generate (you can do so here), and after a while, easy to spot. Quite often you get images featuring aspects of the human face that the AI really struggles with – mismatched earrings, glasses that missing a temple or half a bridge, hair that just doesn’t make sense. The ears, strangely, are almost always odd. And other AI programmes can detect them very quickly. But they will get more sophisticated, and in truth, don’t need to be very sophisticated to fool people, or to poison the well.

The short-term ambitions of this fakery are to spread the false narrative behind Russia’s aggression. The long-term impacts are enormous: they threaten the integrity of information and the future of almost all online platforms.