What a week it has been. Following last week’s referendum on the UK’s EU membership, we find ourselves living through a period of unprecedented political uncertainty. As I write, the nation’s two major political parties are doing battle to see which can hold the most calamitous leadership contest, and while it is clear that a majority of the population desires to break free from the clutches of Europe, it appears that no-one has any idea how or when our liberation will be achieved.

The shock events of yesterday – chiefly Michael Gove’s announcement of his leadership bid and Boris Johnson’s withdrawal – mean that now, more than ever, nothing is certain but death, taxes, and England bowing out of a major tournament early.

Thankfully Trajectory is well-placed to bring a little more certainty to these tumultuous times, with our time use report ‘A Day In The Life’ – launched at Soho’s Century Club on Wednesday evening – providing an enormously rich source of data on the way we spend our time. 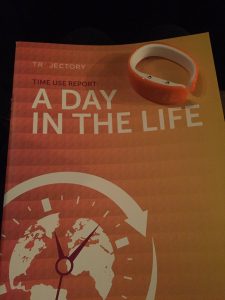 The report was introduced by Trajectory CEO Paul Flatters with Director Tom Johnson providing a comprehensive walkthrough of a report which, at 48 pages, is just the tip of the iceberg of a dataset that accounts for over 9,000 consumer ‘days’ in the UK, the Netherlands, France, Spain, Germany, Italy, Finland, Sweden and the USA.

As our esteemed partner on time use research, the University of Oxford’s Professor Jonathan Gershuny, states,

“Everything we do is situated in time”.

Every occurrence that influences consumer behaviour, whether consciously or unconsciously, occurs in time, and understanding the way in which time is being experienced is changing and is key to the continued ability to influence spending decisions.

Many of the changes we see are subtle, but their ramifications are not. At Trajectory we have long discussed the deregulation of life; the process by which our daily routines are becoming increasingly flexible, and subsequently unrecognisable from previously in our history.

Meal times, one of society’s most heavily routinized practices, have changed enormously in the last forty years, with the peak-times for breakfast, lunch and dinner occurring later and later in the day as our working and leisure portfolios have changed over time. In addition to being later, there is a flattening; peaks are not as high and troughs are not as low, and while we are far from seeing the end of meal times, we are likely to see them bleed into each other to an increasing extent. It is no surprise in this context that we have seen the rise of ‘bottomless brunches’, as the temporal conventions around breakfast, lunch and alcohol consumption continue to recede.

The role of technology in these changes cannot be ignored. In the year 2000, the number of people using the internet at any point during the day was never higher than 1%. Just over 15 years later and 25% of adults in the UK are using a connected device – be it a computer, smartphone, or laptop – at 8 am, rising to 37% in 2016. The effect of this growth in technology’s reach is, in many instances, to stretch the working day; many readers of this blog will have checked their e-mail or their calendar before even getting out of bed, but in addition to simply stretching the working day there are new opportunities for consumption. The growth in e-commerce means we can now shop 24/7 whether in bed, at work or in transit, and the advent of social media has vastly increased opportunities to target advertising at consumers.

Digitalisation is disruptive, but then, at the moment in Europe, so is just about everything else. In uncertain times, digitalisation must be embraced.

Greater understanding of the way in which societies use of time is transforming will allow any organisation to be better prepared for changes when they occur, reducing risk and informing strategy through empirically driven insight.