This week, Sky News announced that it would launch a new ‘pop-up’ channel that will report all the news – except that about Brexit. Sky News Brexit-Free will be available on Sky and YouTube from 5pm to 10pm every weekday night.

“Brexit is an historic story that has a major impact and we will continue to give it comprehensive coverage. The new channel simply gives people the option to take a break from Brexit, apply a filter to their headlines and hear about issues away from Westminster and Brussels with a focus on hard-hitting, original journalism.”

As explicit news filtering goes, this is not without precedent. In 2012, during the trial of mass murderer Anders Breivik, Norwegians reported suffering from Breivik-fatigue, with one newspaper, Dagbladet, adding a ‘Breivik Button’ to their website in order to removing all stories covering the trial. Brexit, then, has reached a point of equivalence with one of the worst atrocities in recent memory.

On the face of it, this appears to chime with levels of public interest in politics as Brexit continues to dominate the news agenda. Our monthly consumer sentiment tracker, The Optimism Index, explores attention paid to politics. A year ago, as Theresa May was preparing to bring her withdrawal agreement to Parliament for approval, around 40% said they generally paid a high level of attention to politics. By the beginning of this year, that had halved, where it has remained ever since. If anything, Sky News are late to the party. 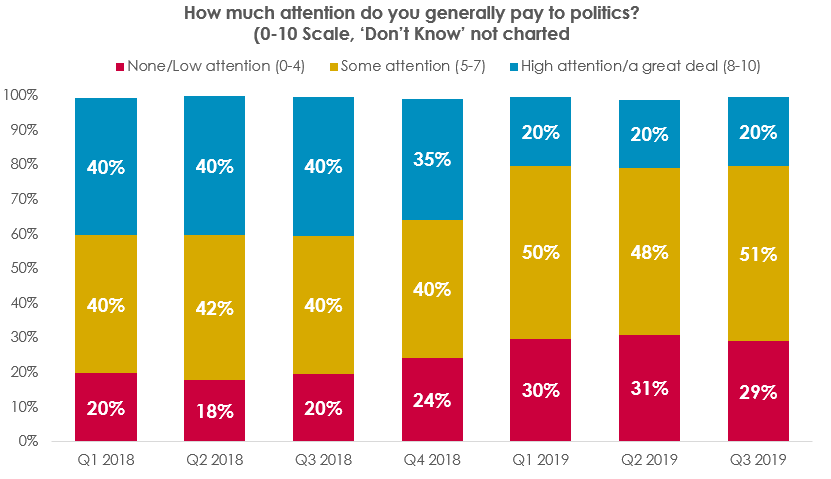 While consumers are paying less attention to politics brands have been getting more political. 2019 has seen multiple campaigns ‘lean in’ to politics (sometimes explicitly, sometimes not) and take a side on the issues of the day. Nike, HSBC, Patagonia and Gillette have all taken a stance on a political issue while others have been stung by inaction. With Sky News Brexit Free launching, should brands return to an apolitical stance?

The short answer is no. Although the constant drip of Brexit news is causing political fatigue the divisions in the UK public exposed and enhanced by Brexit are still there. How we voted in that referendum, how we would vote in a second one and what we think the best outcome would be are still deeply held beliefs – we’re just bored of seeing them played out on the nightly news.

For evidence, take this data from a recent What UK Thinks research paper on the emotional legacy of Brexit: while only 37% have a strong party political identity, 77% of us identify strongly as Leavers or Remainers. We may be tired of the negotiations, the Parliamentary soap opera and the political vox-pops, but we feel just as strongly about the core issue.

Our Brexit views exist as part of our cultural identity, rather than our political one. They help inform our optimism, our outlook and our sense of place in the word. This is the level that brands should aim to connect with. Even as Brexit fatigue reaches its peak there will still be gains to be made from appealing to different sections of our polarised society – and implications for brands that fail to play by the new rules.