Much has been written about the decline of the degree in recent years, but how are debates in industry and education affecting the experiences of young people making decisions on their futures? This week we have guest blogger Tom Hughes, writing about the demise of the degree and his thoughts on the future of his education.

I am often asked in social situations what my plans are for when I leave school. Indeed, for many people my age, future careers and the possibility of going to University has always been high on the agenda, and as we approach the release of A-level results it will become all the more prevalent.

For a long time, gaining a university degree has been considered the definitive way to demonstrate competence and make yourself competitive in the job market. The three-year undergraduate degree has become increasingly popular and in 2016 UCAS reported that the number of successful applicants had reached record levels , however, as the public debate over tuition fees and student debt rumbles on, its status as the best way to show your competence in the jobs market could be at risk.

In 2015, the Chartered Institute for Personnel and Development released a report claiming that over half of graduates were in what they deemed as ‘non-graduate’ jobs, stating that over-qualification had reached a saturation point and that the number of graduates had now “vastly outstripped” the creation of high skilled jobs, at a rate that was only topped by Greece and Estonia. Other recent reports and sources have also indicated similarly high proportions. 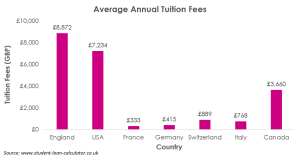 So not only do they risk being overqualified, it also comes at a heavy price. Figures show that the cost of gaining a degree in England is one of the most expensive in the world, with an estimated 45% ending up never paying their student debt. It seems a high price to pay for something that seems to be declining in value.

Findings such as these do not paint an encouraging picture for people like myself looking to start their foray into the world of higher education.

Having a degree has become commonplace, with university discussed in my school careers meetings as an assumption, rather than an option, however many employers have begun to find alternative ways of distinguishing between different candidates and their levels of competence, putting the status of the degree under threat.

The accounting firm Ernst & Young is one of the biggest gradate recruiters in the UK and has recently announced that it has dropped the requirement of a degree from its recruitment process, saying that there is “no evidence” success at university correlates with achievement in later life. The firm said that it would instead use its own assessments, and increasingly employers are finding alternative methods of judgement for candidates.

So how else could potential employees gain and show their skills? Some may take a vocational course or go straight in to industry, a useful method in a jobs market where experience is very highly valued. A relatively new idea is the concept of using a MOOC (massively open online course), where it is possible to build up a specific skillset for comparably little cost. While none of these are mainstream alternatives just yet, it will only be a matter of time.

While all this is unlikely to stop me going to university, it does cause me to stop and lend a thought to how worth it it really is. Some have already gone further, with the Sutton Trust and Ipsos Mori finding a seven percent drop in students that were very or fairly likely to go into higher education.

It may be possible that the end of the mainstream degree, or a change in its values is well and truly in sight.