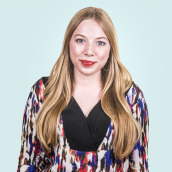 Pantone have announced their colour of the year for 2017 and for those of you who are interested, it’s Greenery PANTONE 15 – 0343.

A little like Oxford Dictionary’s ‘Word of the Year’, Pantone describe this annual award of a colour selection as a ‘‘colour snapshot of what we see taking place in our global culture that serves as an expression of mood and an attitude.’’

With the year the world has just had, it’s not hugely surprising that brands are looking to lighten consumer mood and create a sense of assurance around spending. Leatrice Eiseman, Executive Director of the Pantone Color Institute says

‘‘Greenery bursts forth in 2017 to provide us with the reassurance we yearn for amid a tumultuous social and political environment. Satisfying our growing desire to rejuvenate and revitalize, Greenery symbolizes the reconnection we seek with nature, one another and a larger purpose.’’

Though Pantone is an example of several companies that want to embrace strands of positivity and weave them into a safety net of optimism and ‘new beginnings’, there is no denying that it just isn’t that simple. If anything, now is a time to recognise that we are in a position where the future needs to be interrogated, picked apart and put back together more than ever, before the many challenges that face us can be overcome.

In the context of the rising “alt-right” (a far right movement in the US and elsewhere), continued economic stagnation, dissemination of fake news and continued political shocks (and this isn’t even mentioning the stream of celebrity deaths), you could argue that the colour of 2017 should perhaps have a slightly darker hue than suggested.

The main cause for concern going into the new year is undoubtedly uncertainty, uncertainty of so many things.

Just a glance at how the pound has fared since the EU referendum (below) demonstrates how much the economy has suffered from this no man’s land period. Though consumers might be wanting to look towards the new year as a time to clean up some of this mess, the wait for what Article 50 really means will inevitably delay that ‘fresh start’ for at least a few more months. 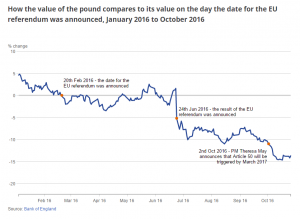 However, it wouldn’t be a Trajectory blog without some stream of positivity that can be gleaned from this rollercoaster of a ride. And sure enough, there are some green shoots of optimism to grasp hold of. For the UK leisure and tourism industries, the fall of the pound has inevitably prompted a rise in overseas visitors to our shores, which goes hand in hand with the rise of the ‘staycation’ (a trend we have researched extensively for VisitEngland) for UK residents as conversion rates continue to dictate where our money stretches the furthest.

Consumers themselves remain upbeat as we head into the festive season – perhaps keen to enjoy Christmas and forget about economic uncertainty for a while. Who could blame them?

But after the choruses of Auld Lang Syne fade away in the small hours of January 1st, we may have to turn our attention back to the challenges ahead. The future has never been more uncertain, more up for grabs and more fragmented than it is now. There will be opportunities ahead, but also challenges. The need to interrogate and understand the future has never been greater.