Unsurprisingly for anyone that knows anything about the state of professional football in China, the Chinese are nowhere to be seen at this year’s FIFA World Cup. Having only qualified once for the tournament and not scoring a single goal during their three matches, the national football team doubles as a national joke.

Like all organised sports, football is ultimately the domain of the government, and so under normal Communist Party conditions, senior officials of the sport would be protected from scrutiny. However, the players, the referees, the owners and even the Football Association itself are openly and brutally criticised by the press and public alike, due to a universal acknowledgement that in this country the game is both terribly played and utterly corrupt.

One reason that China has failed to produce even a passable football team is that the culture strongly favours individual sports and individual success – just see the number of Olympic medal-winners (more than any other country in the 2008 Beijing Games) practically manufactured by the government. And yet even hosting the Olympics doesn’t appear to have had a lasting legacy on sport in the Chinese capital, at least to the outside visitor. Aside from the Water Cube which has since been transformed into a public water park, much of the Olympic Park, including the notorious Bird’s Nest stadium, lies empty.

But while the prospects of Chinese sport on an international level look quite dismal, on an individual level the situation could be seen as more positive. According to the most recent collection of Trajectory Global Foresight data, China has the highest percentage of respondents that participate in a sport (a majority of 50.4%, compared to 29.9% in the UK and a shockingly low 22.6% in the USA).

A possible contributor to this reassuringly high level of exercise is China’s incredibly active older generation; a respectable 44.4% of over 55s participating in some form of sport. One only has to venture down to a public park in Beijing or Shanghai at around 6 or 7am to witness what, to Western eyes at least, could be deemed a phenomenon: hundreds of middle aged and retired people taking part in traditional Chinese exercise classes (including Tai Chi and other martial arts), waltzing or even using the children’s playground. Daily exercise has been a prominent part of Chinese spirituality for thousands of years, and is also one of the most inexpensive and easy ways for this demographic to amuse themselves. 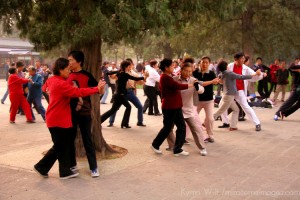 That said, it is unknown whether this generation will pass the exercise bug onto their grandchildren. The rigorous standardised testing that takes place in schools means that many young people today don’t want to sacrifice study time to play sports, and even if they did, the insanely high price of land (in Shanghai the average cost of floor space per metre squared surged 88% between 2012 and 2013 to $3740) means that there may not even be a playing field in their neighbourhood.

At present only 100,000 people in China are reported to play football. Until the sport sheds its embarrassing past (in 2007 the match-fixing issue became a national scandal) and a culture of exercise and teamwork flourishes among the young, the Communist power cannot expect to achieve footballing success on an international level. For the moment, the red state is being shown the red card.

Martha Aitken is a former intern at Trajectory, currently travelling overseas before studying at Cambridge in the Autumn. She is kindly sharing some personal observations from her time in Beijing this year