“What could’ve been robbed has already been stolen.”

So goes a recent and famous repost by Joana Havelange, an Executive of the Local Organising Committee, about the World Cup and corruption. This more or less sets the tone of the current national mood concerning the World Cup, and Brazilian newspapers are guessing that this neat sound bite might turn into a slogan for the entire event. 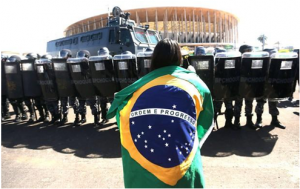 As Brazil edges closer to what will be one of the biggest events the country has seen in years, there’s a bubbling sensation akin to a match-box that’s waiting to strike up into one big ball of fire – suddenly and fiercely. #NãoVaiTerCopa, “No World Cup”, has engraved itself into social media sites and can be seen as graffiti on the walls of host cities across Brazil. Instead of eliciting joy and excitement, the World Cup has put Brazil on tenterhooks.

I tend to take taxis when I travel for work around Brazil, and these short trips in the car provide great moments for a relaxed chat with a local. So far, in the six host cities I’ve recently visited, all but one taxi driver out of 20 or so expressed a sense of excitement. Most responses are angry, referring to the event as horrible, corrupt, unnecessary and not a priority.

Across host cities, World Cup stadiums pierce the cityscape like shiny ivory towers, oddly unfitting to the surrounding environment. Whilst in Fortaleza, a taxi took me from the airport into town and we drove straight past the stadium. It was impressive, and so was one of the main avenues that had been completely demolished, now just a river of mud and dirt, months behind schedule. The airport terminal promised for the World Cup was also a mere pile of bricks with some lead sticking out of foundation pillars. “So is that piece of junk going to be delivered as promised after the World Cup?” the taxi driver said as he jerked his thumb at the sort-of-started-but-not-really new airport terminal, “it probably won’t, as the rest of the stuff they promised”.

Some of the most expensive shiny new stadiums have been built in host cities that don’t even have a decent football team like Brasília, Manaus and Cuiabá. Locals wonder who will foot the bill for maintenance costs and if they will ever fill the stadiums again after the event.

Brazilians are pissed off and are slowly but surely gaining courage to show it – including on President Dilma’s Twitter page (a great 101 lesson into Brazilian insults and offensive humour, by the way). In this new republic that’s still acclimatising to democracy, Brazilians are reclaiming spaces and growing their collective voice, despite facing police brutality.

And the Brazilian people have legitimate reasons too  – with São Paulo’s population facing a severe water shortage crisis, 7 million people lacking basic sanitation, less than 20% of all committed infrastructure projects complete, and a government and police force that is getting ready to treat protestors as terrorists, it’s unlikely we’re going to be samba-ing our way to the stadiums. In the face of such issues, a World Cup hardly seems a priority, yet the government continues to invest more in stadiums than public health or education.

The World Cup was an opportunity for the “country of the future” to finally break through the developing ranks, emerge and shine amongst the new world. Brazilians were excited with the long list of promises attached to the World Cup. So whilst this event could have spurred growth, completed much-needed infrastructure projects and provided basic services to a growing middle class, Brazilians feel that they have been let down once again. As a taxi driver in São Paulo told me: “It’s as if we have forever been rowing against the tide, and I’m unsure how long I can go on.”

With a history of corruption, Brazilians sense they have been robbed yet again. Undelivered commitments and empty promises fuelled the social unrest we saw last year in June. With an upcoming national election in October after 12 years of PT rule (Worker’s Party), this World Cup isn’t about football; it’s more than a sporting event. This World Cup is a politically defining moment for Brazilian power structures and society, and is the Brazilian people’s opportunity to taken on more political driving force.

Katerina Elias-Trostmann is a Research Assistant for the World Resources Institute Brasil (WRI). Born to Brazilian-German parents and with Middle Eastern heritage, she grew up in London and currently lives in São Paulo.